The Government of Punjab on Monday expanded the winter excursions of schools because of the unwavering virus wave in the area.

A warning gave by the commonplace School Education Department advised that all open and tuition based schools in the region will re-open on January 13. 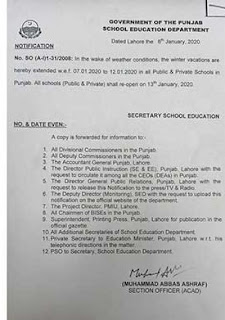 "In the wake of climate conditions, the winter get-aways are thusly reached out with impact from Jan 7, 2020 to Jan 12, 2020 in all open and tuition based schools in Punjab," read the warning.

The warning was sent to every one of the divisions and agent magistrates of the region and different authorities of the commonplace government.

The Punjab government had before declared 15-day winter relaxes over the area on December 13.

All open and non-public schools crosswise over Punjab were to watch winter excursions from December 20, 2019 till January 5, 2020. Notwithstanding, the excursions were later stretched out to January 7 preceding the latest expansion
Breaking news Latest Breaking News