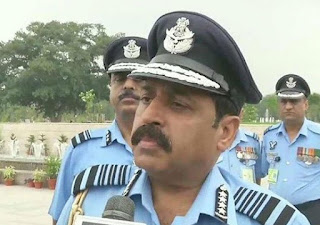 India's Air Force boss has at long last conceded that its Mi-17 chopper, which smashed close Srinagar on February 27 this year, descended after its own rocket erroneously hit it.

"Court of Inquiry finished and it was our misstep as our rocket had hit our very own chopper," Indian Air Chief Marshal Rakesh Kumar Singh Bhadauria told the ANI news office on Friday.

Specialists had before discovered that the Indian air safeguard rocket was terminated in a matter of seconds before the accident of the Mi17 V5 helicopter at Budgam close Srinagar. In any case, the Indian Air Force still couldn't seem to acknowledge its very own deficiency.

"We will make a move against two officials. We acknowledge this was our enormous error and we will guarantee such mix-ups are not rehashed in future," the Indian air boss said.

The occurrence had occurred during a time of elevated India-Pakistan strains, that day that the Pakistan Air Force (PAF) shot down two Indian airplane inside Pakistani airspace and Pakistani powers captured an Indian pilot, Wing Commander Abhinandan Varthaman, on the ground.

One of the Indian flying machine had fallen into Azad Jammu and Kashmir, while the other wound up in Indian involved Kashmir.