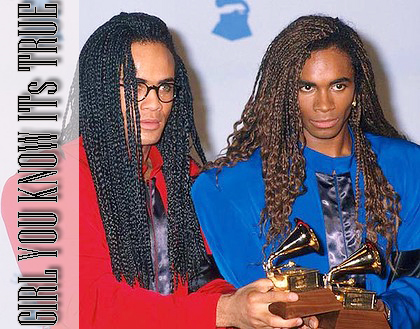 USA - New York: There is a most bitter and actual truth behind the Mille Vanilli band of duo singer namely Fab Morvan and Rob Pilatus. The Summarize story of both Young singers who were launched in 80's.

If we talk about both singers of World's prominent band Milli Vanilli launched on 7th March in Year  1989 & released their most famous American Album as a name of 'Girl you Know its True' after released of said debut album Fab Morvan & Rob Pilatus became worlds famous pop singer. And in continuation of their out standing performance in singing as well as dancing they awarded various awards in respect of their singing skills.

They were achieving and success their goals day by day and they have a lots of millions - trillions die hard fans all over the world who love them a lot. In a routine setup they were performed in a concert in Bristol Connecticut performance was broadcast live on MTV in a month of JULY in Year 1989 where they were singing their famous debut song 'GIRL YOU KNOW ITS TRUE' suddenly the recording of said track was jammed, repeatedly playing the said track's lyric 'girl you know its true' over again and again. That was the vital sign behind the Milli Vanilli Scandal which was suddenly caught by public and media who were present in said concert; Fab Morvan & Rob Pilatus have became completely shocked because they have been understood that their Lip syncing scandal has been reveal in live Show in front of Public and Media but they tried to continue & dance for just a few moments as before rushing offstage.

After that the such scandal was revealed singer Charles Shaw in December 1989 that actually one of the three vocalist behind said band Milli Vanilli's track. Actually a producer Frank Farian was only behind such conspiracy they only produced a well entertainer in a faces of Fab Morvan and Rob Pilatus who were outstanding in dance and have a good performer where he arranged in order to sang the song on which Fab & Rob performed and lip syncing, the same Frank confessed in on 14th November 1990 in front of Media due to which duo Milli Vanilli also returned their one of the best award Grammy Awards & that the actual reason behind their de famous.

After that Rob Pilatus was became suicide due to heavy dosage of Narcotics but Fab Morvan is still live & trying to sing well.